“We now have evidence of a sustained market recovery in some of the nation’s largest markets, and signs of a price floor in other regions hit hard by the eighteen month-old housing correction,” said Phil Soper, president and CEO, Royal LePage. “Only in the West do we see a significant number of home buyers remaining on the sidelines, depressing sales volumes and causing prices to sag. Buoyed by supportive economic conditions, many stubborn homeowners in B.C. and Alberta remain unwilling to let their precious real estate go for less than what they perceive as fair value, which has gone a long way to protecting existing home values.”

Canada’s economy continues to grow, albeit at an unexceptional pace, with a slumping housing market being a major contributor to the slowdown. Offsetting this, business investment has picked up considerably, helping to sustain a period of exceptional employment growth, particularly in British Columbia, Ontario, and Quebec.

Trade tension continues to weigh on consumer confidence and housing market health. A recent detente in Chinese-American relations, and a stronger than expected mid-year employment picture has muted some of the U.S. recession talk. While a rate cut by the Federal Reserve is still a possibility, a similar move by the Bank of Canada is less likely. Lower rates south of the border and a stronger American economy would have positive implications for exports and Canadian consumer and business confidence.

Said Soper, “Don’t misinterpret rate cut expectations south of the border as rate cut likelihood in Canada. We have related but independent economies and monetary policy.”

Looking ahead to the end of the year, Royal LePage expects national home prices to see a modest uptick, rising 0.4 per cent compared to the end of 2018. The Greater Toronto Area and Greater Montreal Area are expected to continue to drive national home price gains with forecast increases of 1.4 per cent and 4.5 per cent respectively, while Ottawa is expected to outpace the GTA with a projected price increase of 1.6 per cent by year-end. Weakness in the Greater Vancouver market is expected to continue, with the aggregate home price forecast to decrease by 5.5 per cent compared to end of year 2018. Other Western cities are also expected to decline, with home prices in Calgary, Edmonton, and Regina expected to decrease 3.6 per cent, 3.0 per cent, and 4.9 per cent respectively.

The enhanced housing affordability measures introduced in the federal budget in March are not expected to have a significant effect on home prices. The increase in the registered retirement savings plan withdrawal limit to $35,000 from $25,000 has been in effect since it was announced. The First-Time Home Buyer Incentive – a three-year, $1.25 billion shared equity mortgage program whereby the Canadian Housing and Mortgage Corporation (CMHC) will co-invest up to five per cent of the purchase price of an existing home – is expected to begin in September. The program is expected to help young Canadians afford a first home closer to urban centres.

“Overall, the new government programs should be supportive of the housing market, but their impact on home price appreciation will likely be minor – and that’s a good thing,” said Soper. “Heavy-handed policy intervention can cause artificial spikes or drops in home prices. What it doesn’t do is change the need for shelter; it just stokes price inflation and housing shortages, or market slumps and dangerous pent-up demand.”

Once again, home price appreciation in Ontario cities heavily influenced the national results in the second quarter of 2019, driven by pent-up demand from a sluggish first quarter, a strong job market, and an influx of new residents into the GTA.

“The market in the GTA began to tighten this spring, as sales outstripped new listings,” said Soper. “In the City of Toronto, prices rose above inflation across all housing types, led once again by strength in the condo market. But the most encouraging signs came from the suburbs, where areas that saw the most significant price corrections such as Oshawa and Richmond Hill started to rebound.”

In Quebec, the Greater Montreal Area remained one of the strongest markets in the country in the second quarter of 2019, with the aggregate price of a home increasing 5.8 per cent year-over-year to $410,828. The rate of home price appreciation in the Greater Montreal Area once again surpassed rates seen in the GTA (2.6%), Greater Vancouver (-4.1%) and the national average (1.1%).

“We forecast that the Montreal real estate market would begin to see more modest home price appreciation after robust growth last year, but the quarter-over-quarter increases are showing that the pace of growth in the area is not slowing,” said Soper. “Despite the strength of the Greater Montreal Area for the past three years, the city’s prices remain one third of Greater Vancouver and half of those in the Greater Toronto Area. At Montreal’s current home price growth rate, it would take 13 and 19 years respectively for Montreal home prices to catch up to Toronto and Vancouver.”

In British Columbia, government intervention continues to weigh on the housing market despite strong economic fundamentals. Home prices in Greater Vancouver declined for the second straight quarter on year-over-year basis, with the aggregate price falling 4.1 per cent in the second quarter to $1,208,674. The correction that started in the City of Vancouver has spread across the region with prices in Burnaby, Langley, and Richmond falling 7.3 per cent, 4.4 per cent, and 4.1 per cent, respectively.

“The slowdown that initially began in the British Columbia lower mainland’s most expensive trading areas, Vancouver and the region’s North Shore, has moved to the relatively affordable suburbs, as the policy-driven housing downturn nears the three-year mark,” said Soper. “Home price trends lag behind changes in home sales activity. With one of the strongest economies in the country, I would expect the recovery in sales volumes to begin this fall, with a slow recovery in home prices to follow. Other regions in the province such as Kelowna and Victoria have held up reasonably well so far.”

With sales still well below the ten-year average and new listings increasing, properties in the region’s most expensive markets like West Vancouver, North Vancouver, and the City of Vancouver were also hard hit, decreasing 7.6 per cent, 4.2 per cent, and 4.7 per cent year-over-year, respectively.

With an unemployment rate of 6.6 per cent as of June and personal insolvencies rising, the Alberta economy continues to lag, though a slight bump in employment is predicted in 2020. The aggregate price of a home in Calgary, Edmonton, and Fort McMurray fell 5.0 per cent, 0.9 per cent, and 0.1 per cent year-over-year to $460,089, $371,106 and $567,312, respectively. Prices were relatively stable on a quarter-over-quarter basis, and there is a possibility that the approval of the Trans Mountain Pipeline extension will spur an increase in consumer confidence. 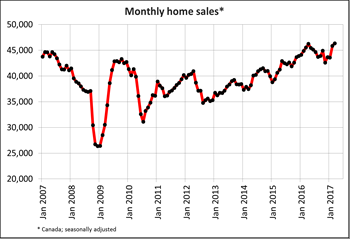